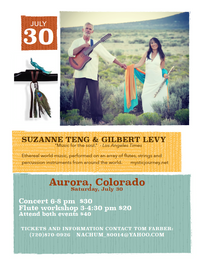 WHISPER is available for PURCHASE!

The REVIEWS are coming in and they're wonderful!

2020 dates have been listed in our calendar section! Visits to Houston, Taos, Utah...more coming...

Kingdom of Mountains was just awarded the Peace Song Award in the World Music Category!

Our piece "Yunnan" just received a nomination from the Hollywood Music in Media Awards!

Our Sheet music is now available in our store!

More nominations just in..."Subhadra," the opening track to Kingdom of Mountains has been nominated for Track of the Year and the album is up for Best Contemporary Instrumental Album by One World Music in the UK !

Kingdom of Mountains has qualified in three categories for the Zone Music Awards! Having placed in the top 10, we are entered into Album of the Year and have also qualified for the Best Relaxation/Meditation album and Best World album categories.  Radio hosts of our genre do the voting, winners are announced in May.

Mystic Journey was recently awarded the SILVER MEDAL in the Global Music Awards in two divisions: New Age and Instrumentalists!

And thrilled to share many great reviews for Kingdom of Mountains on our Press page.

KoM was also Top of the Charts and CD of the Month (Sept.) for the wonderful PRI radio program ECHOES!  Listen to their podcast on Mystic Journey.

Thanks for visiting our site!